Overview: In the century after the civil war, as many as 5,000 people of color were murdered by mobs who believed in the cause of white suprmacy.

Lynching, by definition, is the condemning of someone to death by the whims of a mob or entire community — no judge. Over time, it became racist, common, and brutal.

Dodge County lies in central Georgia. It was established in 1870 and had existed as a prominent area for cotton production during the antebellum years. As a result of its history, racism ran rampant through the county, and there were a copius amount of lynchings that were conducted there. Dodge County possesses a large African American population, who remain victims to lynchings at the turn of the 20th century and during the early 1900s. Given its history, the rural southern county generally provides a variety of different lynching incidents and resistance to such violent acts moreso than most other counties under study.

Provided here are the different yet horrid accounts of those lynchings in chronological order, which depict the unjust power a white mob had over the African American community in merely one county in the South. It was a power that often wrongly superseded law itself. Today, it remains important to study such cases to show the importance of their remembering, especially during a time where many have tried to forget as the problems of America's racist past still are prevalent in such a amnesiac society.

My partner and I have combed through all available records in an attempt to find all the information we can on each lynching. Those incidents where sparse information seem apparent should only serve as a testament to a whitewashed portion of society, who found it important to erase not only their lynching victims lives, but also their very historical existence. We have tried to make amends for such action by including all that we can here. Still, more information is being discovered about lynching victims across the South with each passing day.

Lynched as a result of attempted rape of a white women.

Lynched just outside of dodge county under the charge of attempted rape of a white woman. On September 6, 1892, “one thousand determined men” took Williams from his jail cell in Dodge County at 2 o clock in the afternoon. The mob carried him a little past town lines, after which, they shot him to death and hung him in a tree as a “warning to all evil-doers.” 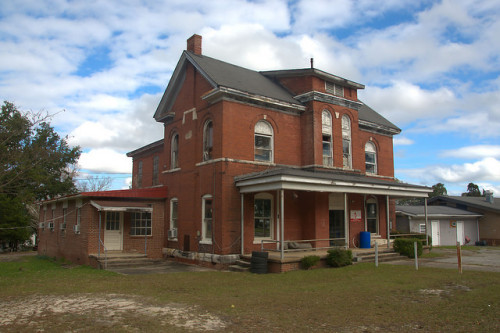 The historic Dodge County Jail. Built in Eastman, GA in 1897 by the Pauly Jail Building Company was closed in 1973.

Mr. Claus was accused of assaulting and raping a young teacher, Miss Susie Johnson, who was a high esteemed member of Eastman Georgia. Apparently, Miss Johnson was captured on her way home from the school, when Mr. Claus then held her prisoner for several hours. The next day when word spread of the assault, a search party formed and captured a black man that they believed was Mr. Claus. They brought the young man to the home of Miss Johnson, where she wrongfully agreed that this was the man that had assaulted her. The unnamed man was unfortunately hung and the mob believed they had done their civic “duty”. 12 days later, however, the real Ed Claus was located in Darien, GA, and the mob had realized that they lynched the wrong man, who had tried to plee to them that he was in fact not Edward Claus. This did not stop them from storming the prison that the real Edward Claus was located in and lynching him as well.

Lynched as a result of suspected attempted rape of a white woman.

According to the source, White attempted to shoot up the family of Mr. Thomas Allen. He shot another black man starting out on his mission when the former refused to join him on his quest. White continued to the Allen house and proceeded to shoot at him and his wife until they fled from their home. Soon after, a mob gathered at the Allen house and chased and captured White. White was taken to jail, but soon after another mob gathered, abducted White from his cell, took him eleven miles away from Yonkers, GA, tied him to a tree, and finally riddled his body with bullets.

Lynched at Gum Branch. King encountered the daughters of Sam Nicholson, one of Eastman’s most prominent citizens. King attempted to steal the two ladies’ horse; however soon became frightened by their screams. Search dogs were sent by the county convict camp, and King was caught a few hours later. He was then intercepted by a crowd of 175 men at Gum Swamp, and was strung up to a Sapling.

Frank Mack was lynched near Eastman, Georgia on October 5, 1911. Mack, an African American chauffeur from Dublin, Georgia was lynched for attempting assault on the wife of a well-known planter of Dodge County. The screams of the planter’s wife drew attention from other African Americans working in the fields, which eventually led to the swift capture of Mack. Mack was being taken to Eastman jail when a mob of unknown men intercepted him at Gum Swamp, took him further down the road, tied him to a tree, and riddled his body with bullets.

Both men were lynched after being accused of murder.

Two White Men, John Dowdy and Levi Evans, invaded the home of widow, Emma McCollers, to rape her two daughters. The screams attracted 72 year old Berry Washington who shot and killed John Dowdy in defense of the two young girls. Washington turned himself in to the police, and soon after, a lynch mob invaded the jail, took Washington and hung him from a post. County officials tried to keep this quiet for two months until the NAACP eventually found out. When it became public throughout Georgia, Governor Dorsey was furious and took action issuing a reward of $1500 for the arrest of Washington’s killers. Although the reward was never given, it showed that the public was willing to punish those that committed unlawful lynchings.This incident also sparked action from the Georgia legislature/senate to pass a bill that would enable the governor to remove the sheriff of a county where lynching had occurred.

The NAACP was the primary black rights advocate group in the South, and specifically in Dodge county as well.  The NAACP was single handedly responsible for the governor issuing a warrant for the arrest of the lynchers of Berry Washington. Although the lynchers were never charged, this event raised awareness and prioritized the wrongful actions taken against black people.

The case of Eli Cooper does more than to merely reveal another chapter in the brutality of lynchings within the Dodge County area. It also provides an example of the anti-lynching movement that proves to be fairly innovative given the year of its occurence in 1919. Furthermore, the case shows that the cause of anti-lynching and resistance from the black community had a substantial amount of followers. African Americans in this central Georgia county were obviously intent on not remaining victims to the unjust lynching phenomenon ravaging their community across the South like a plague. Such resistance brings to light racisms counter to the resistance revealing how deeply rooted such hatred was in the establishment of white officials throughout society. This is made evident by the statement of Sherriff Mullis.

Remembrance and Resitance to Lynching Today:

A link to the video explaining the Equal Justice Initiative's planning and motivation to build the National Memorial for Peace and jUstice and one Athens native's quest to uncover the whole truth about the each and every individual victim of lynching in the state of Georgia.

Although it is comforting to know that actions are being taken to properly remember and reflect on the lynching that occurred during this dark era in American history, it may be perhaps more sobering to reflect on the actions that are not being taken. There have been no recent official actions taken by members of Dodge County to memorialize or even remember the murders of their fellow county members. We can only hope that the future may be able to change such abstinence in Dodge County and most others across the South.