John Hayes was lynched for an alleged attack on a small, five year old girl. Hayes was a prisoner in the Crisp County Conviction Camp and he was accused of attack the daughter of on of the prison wardens. It is said that he told the girl that he would help her catch a pigeon. According to newspapers, the girl was not injured. The Atlanta Constitution reported that following the lynching, the coroner’s jury reached a verdict that his death came at the hands of persons unknown. This is ironic because newpapers also reported that Haye was forcibly taken by Crisp county guards Parker and Petterson by a mob of 50 to 75 people. He was hung from a tree near Coney’s bridge and his body was riddled with bullet wounds.

Albert Hamilton drove a horse-drawn carriage for a living in his hometown of Cordele, Georgia. Hamilton was 18-years-old in January 30, 1912, when he was accused of assaulting a white woman.

As reported by the Associated Press and the Daily times-enterprise, Hamilton's arrest resulted after a young white woman of a prominent Cordele family was assaulted in the city’s principal residence section. As she walked along the street, she was allegedly taken by Hamilton, dragged behind a high fence a short distance away from neighbors and was raped. When she recovered officers aided her and began to search for him. Hamilton was arrested later and was positively identified by the woman.

Governor Brown authorized to rush state troops to Cordele, Ga., but it was too late. A mob stormed the jail to get Hamilton. The Sheriff refused to give up the jail keys and was assaulted by the mob as a result.

As stated by the Baltimore Sun, The mob of 500 people dragged him from his cell, beat him severely, hanged him from a nearby tree and shot him more than 300 times. Hamilton's best friend, a 15-year-old boy named Elijah Poole, who later changed his last name to Muhammad, watched the killing in horror. He eventually moved to Detroit and helped to start a religious sect known as the Nation of Islam. Elijah Muhammad began to preach the message of white people being devils. It is figured that the mob he witnessed and the subsequent postcards made after Hamilton’s death influenced his beliefs. 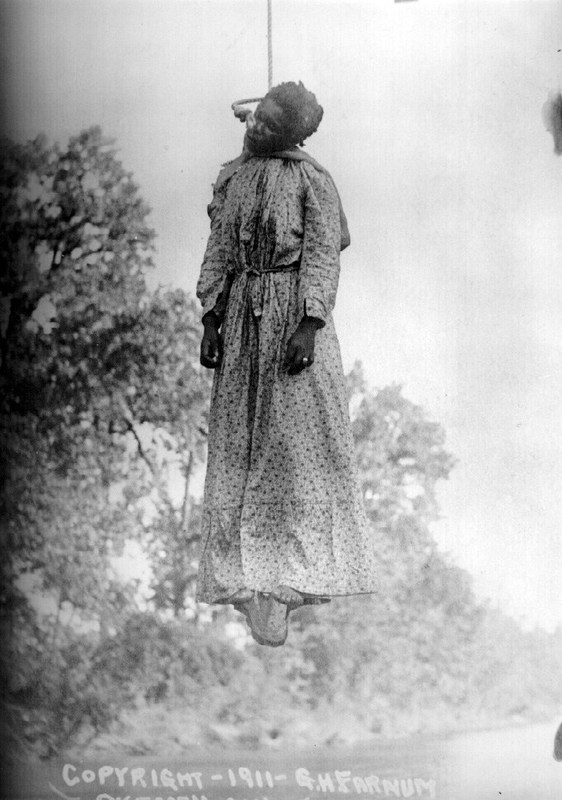 In June of 1912, Annie Boston, was accused of murdering her employer, Mrs. R. E. Jordan. On Monday, June 24,1912, conflict between Jordan and Boston arose about the quality of her performance. According to the police report, at approximately 4:00 pm, Jordan exited the rear end of the house and as she approached the backyard, Boston attacked Jordan from behind, cutting her throat with a razor.

Immediately, the neighbors seized Boston and Dooly County authorities were called. At 10:30 pm that night, a mob of 100 people forced Sheriff Ward of Crisp County and local policeman to release Boston as she was being transferred from the jail to an undisclosed location in the town for safety. Witnesses saw the mob's cars take Boston back for the lynching. After arriving at the destination near the Jordan home, a rope was placed around Boston's neck and she was hung as the men argued over the chance to pull the rope.

This newspaper clipping was published the week Lee Chitwood's body was found, and documents what's known from the incident.

Lee Chitwood -a white farmer- was a newcomer to Crisp County, and allegedly raped his 13-year-old step daughter. According to the police report, he told the child that he would kill her if she told anyone. The girl was silent for about a week, but finally told her mother who immediately went to police and obtained a warrant for Chitwood's arrest.

As word got out, seven men located Chitwood and said that they would guard him until the sheriff came, but after a few hours they went to the prosecutor and asked him to dismiss the warrant. When asked why, they said that Chitwood escaped and left the country. This was believable, as he was a newcomer, and had only been in the United States for 5 years.

Lee Chitwood's remains were then found in the area of where he allegedly raped his stepdaughter. He appeared to have been lynched, shot, and eventually devoured by insects and wild animals. It is unknown if his body was ever properly buried.

This newspaper clipping was published the day after Jim Cobb was lynched to document the incident.

On May 22, 1918 in Cordele, Ga., a mob of about 400 men stormed the Crisp county jail at night and seized Jim Cobb as a result of the murder of Mrs. A.L. Simmons, a farmer's wife, which occurred about eight miles from the jail. Cobb was under arrest on suspicion that he had murdered the woman. Cobb’s alleged crime was said to be one of the most brutal in the county, as he supposedly killed Simmons with one blow to the head and stabbed her multiple times with two silver table forks.

Jim Cobb's name was mentioned as a potential suspect as he was recently bailed out of jail by Mr. Simmons and responsible for working on their land to pay off his debts. As a result, Mr. Simmons and Sheriff Ward went to the "colored cabins" and questioned him about the murder. Cobb claimed that he was nowhere near the farm that day, and at the time of the murder, Cobb was with an African American woman that was washing his overalls, which was true. By this time, a group of angry spectators gathered around Cobb's home and the sheriff arrested him until everything got sorted out.

At around midnight, a mob broke down the outside jail door in order to gain entrance. Sheriff Ward pleaded with the mob leaders for about an hour to stop as Cobb may be the wrong suspect, but they forced their way to Cobb’s cell, broke open the cell door, and placed him in an automobile and drove off. About fifty other automobiles filled with men followed.

The mob then took Cobb back to where Ms. A.L. Simmons was killed, and hung, burned, and shot him to pieces as a way of "justice". After no one claimed his body, the coroner buried what was left of him by the tree he was lynched at.

John Dukes was murdered on June 9th, 1938. John Dukes was a black businessman, who was accused of shooting Marshal Freeman O. Epps after resisting arrest for drunkenness. Epps was told about Duke’s behavior by the blacks, saying he was drunk and raising a row in the Negro section of the town. Dukes opened fire on Epps, Epps returned the fire before dying and wounded Dukes twice. Marshal Epps and John Dukes were good friends and town blamed the whole thing to liquor and nothing else. Dukes had slain the town's only law officer and deputy sheriffs were left in charge of the city at night. An angry mob would then apprehend Dukes, drag him and set his body on fire during the lynching.

The townsmen tried to minimize the lynching by saying he was already drunk to death and it was barely a lynching. They claimed “ "Dukes was unconscious and dying when the boys came to get him, and he probably was dead before they set him on fire." Despite their efforts, the murder of John Dukes was seen as gruesome and played a large role in changing public opinion about lynching especially because Dukes was considered a nice man and was well liked by whites.

There are conflicting stories about why John Dukes was murder. Once sources say John Dukes, put together a group of investors that would save a bank and it would be under the ownership of African Americans. It was kept quiet about the accomplishment until he had the reception at the bank for all the community to see. After the reception, his murder and lynching took place.

Accused of shooting the wife of a prominent white planter, his employer and assaulting the planter's daughter. 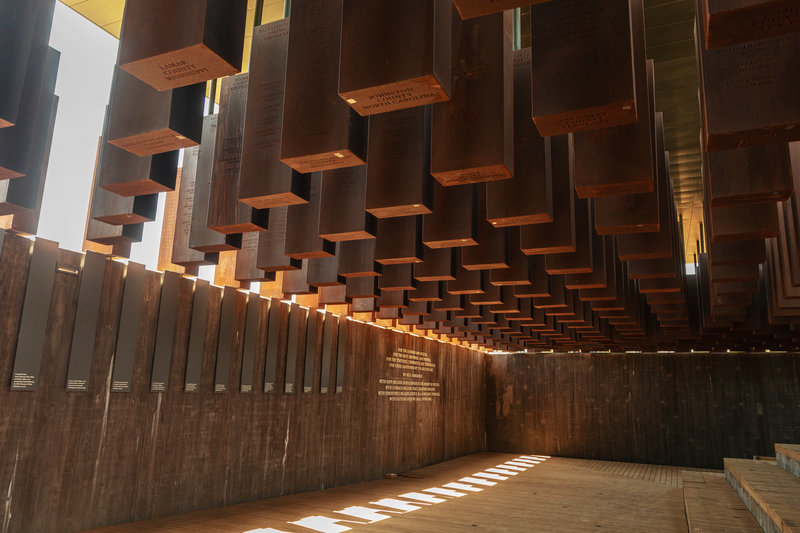 The Legacy Museum: From Enslavement to Mass Incarceration was opened to the public on April 26, 2018. The 11,000-square-foot museum is situated where a former warehouse that housed slaves once was. It is also located in between a port that brought in slaves from overseas, and a market that auctioned them off to begin their lives of servitude.

The Legacy Museum utilizes advanced technology and imagery to create an experience where visitors can truly grasp the evolution of slavery, racially fueled lynchings, Jim Crow, segregation, and mass incarceration. To honor lynching victims, the museum built an outdoor space with hundreds of large stone blocks hanging from the roof. Carved onto these blocks are the names of approximately 4,000 documented lynchings from all over the United States.

To get more information on this memorial, watch this video done by CNN:

"Death at the Hands of Persons Unkown: The Geography of Lynchings in The Deep South, 1882 to 1910". LSU Digital Commons. https://digitalcommons.lsu.edu/cgi/viewcontent.cgi?article=6383&context=gradschool_disstheses