Gwinnett County, a notable piece of the Atlanta metro area, was founded in 1818 and named for Button Gwinnett, one of the three Georgian signers of the Declaration of Independence. Mostly agrarian in its early years, Gwinnett later became an economic hub by 1850, bosting a population of 11,257. Most early records from Gwinnett County are lost, however, after a courthouse fire in 1871 destroyed most early documentation.

Winn House, adjacent to the log cabin used as the Gwinnett County Courthouse of 1824. The Ku Klux Klan burned down the courthouse in 1872, and no records or photos from the house survived from that time.

In 1922, Georgia Congressman Charles H. Brand told the story of Mart McConnell’s lynching on the floor of the state legislature, asserting that the first southern lynching was perpetrated by “Yankees.”

According to Congressman Brand, shortly after the Civil War ended in 1865, Mart McConnell, a newly freed man, was accused of assaulting a white woman. McConnell reportedly fled to Union troops who were camped out at the square in Loganville. The Union soldiers, after hearing McConnell’s story, responded by taking him into custody, buying a rope, and hanging him at the courthouse square.

No other corroborating sources on McConnell could be located.

Smeal, a presumed sharecropper for Thomas Dillard, was accused of stealing a horse locally. Around February 6, 1882, a mob broke into Smeal’s cabin and whipped him into giving a confession. The mob hung Smeal near Jefferson and Lawerenceville, outdoors from “a black jack limb.” His body was later found on February 14, 1882.

No other information on Smeal could be located.

On February 10, 1882, The Atlanta Constitution reported of a rumor swirling around Covington and Conyers that William Rice, a local white man, had been killed. His body was reportedly found near a local distillery, “cut nearly in twain.” After being reported, Collector Clark acknowledged having “made some arrests and seizures” regarding the crime. The arrested men, believed to have been illegal moonshiners, accused William Rice of informing on them. They “threatened to wreak vengeance upon him if he ever got into their clutches,” but maintained their innocence in his killing.

No other personal information about William Rice could be located.

Thomas Martin was taken on January 28, 1882 from the home of Thomas Dillard, where Martin presumably worked. A mob of unidentified individuals approached Martin’s home with a chain and rope. When Dillard overheard and went outside, the party told him to “go back and go to bed,” that they were “doing [him] a favor” by not allowing him to witness it. According to reports from the Gwinnett Herald and Athens Southern Watchman, the group claimed “they lost a horse and wanted to talk to the Negro awhile.”

Thomas Martin’s body was found on March 10, 1882, floating in Perry’s mill pond, his arms and legs covered in chains. Coroner F. J. Peters summed a coroner's jury in Gwinnett County, GA, which reported: they “are of the opinion that the deceased came to his death by a direct blow on the left side of his head, crushing the skull, and causing death instantly, by some unknown party.”

No other information is known about Thomas Martin.

Frank Johnson, an 18 year old Black man from from Carnesville, GA, was the victim of an attempted lynching in 1897. He survived the initial attempt, but it is unknown whether or not he was later captured. Johnson was sentenced to 20 years for “attempting to assault a young white girl, only 4 years old” in Roylston. He plead innocent to the crime, but was placed in the Fulton County Jail. As rumors of a lynching attempt grew, the sheriffs decided to move Johnson. He was held overnight in the woods by the sheriff to avoid lynching: “Sheriff… took [him] about five miles from the jail into the most isolated part of the woods. Here he tied him securely to a tree and sat up all night long watching him.”

The following day, Johnson was transported to Atlanta to escape the violence. Once in Atlanta,  he “confesses” to a reporter for the Evening Constitution, “acknowledging guilt” for the first time. This ‘confession’ seems suspicious given that they reported that he didn’t know why he “made the assault” and Johnson said, “I jes didn’t think about it at de time.” It was then reported that Johnson was to be headed to the coal mines for a 20 year sentence of hard labor.

It is unknown what happened to Frank Johnson after this point. 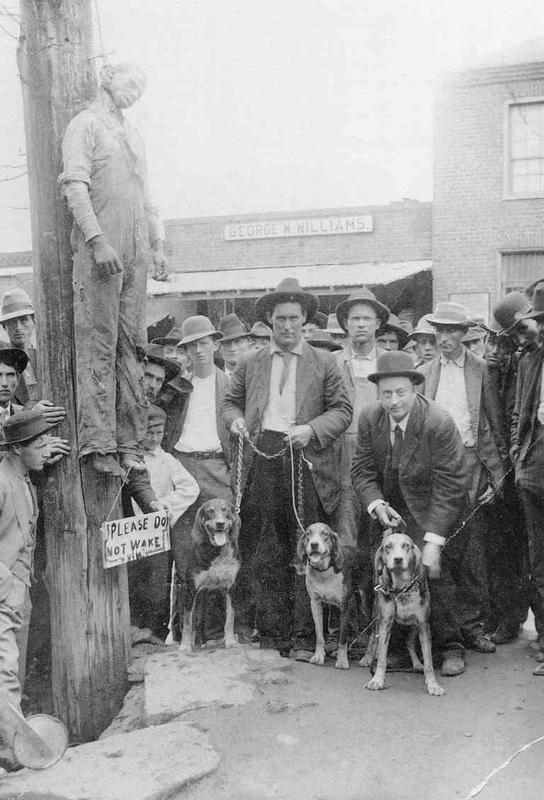 Born Charles H. Hale, Hale was the son of Sam and Lou Hall, born in Clarke County, GA. Hale was pulled from the local jail and hung from a pole in downtown Lawrenceville in front of what is not Corner Stop Cafe after being accused of assaulting a prominent married white woman in town. Several newspaper companies covered the lynching including The News-Hearld, Lawrenceville who titled the article “Hale Lynched Himself Says Mack Renwick”

On May 8, 1908 Henry Campbell was publicly lynched after being convicted of murdering Ella Hudson and her daughter -- according to authorities Campbell and an accomplice slashed Ella Hudson’s stomach and fractured her skull, set the house on fire and left her 4-month old daughter to die. As shown in the picture to the left, over one thousand white Americans gathered around to bare witness to the lynching. Outside of the old county jail in Lawrenceville News articles described Campbell as the last person to be hanged in Gwinnett County, however Charlie Hale was lynched 3 years later.

Elleck was a slave to Col. James Austin, married to another slave whom he lived with on his master’s land. On October 10th, 1848 Col , Austin entered into Ellick’s home intoxicated and attempted to assault Ellick’s wife which ended in Ellick killing his master in self defense. Ellick turned himself in the same night by walking to the courthouse and waiting for sunrise to admit what he did. A month after the murder, Ellick was lynched outside of the jail.