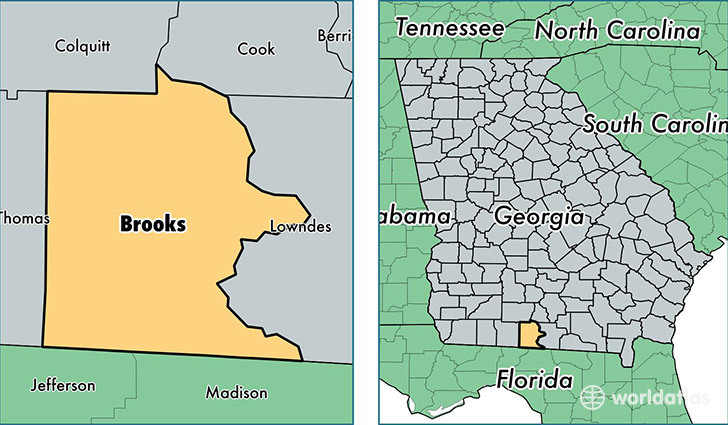 Brooks county is along the southern border of Georgia and was one of the worst places to live for persons of color during the peak period of lynching from 1880 to 1940. This county had one of the highest lynching rates in the state. Its largest city is Quitman, which was often used as a landmark to describe locations of the attacks in the sources we used. Brooks county had the famous case of the lynching rampage of May 1918, where at least 11 people were lynched during a single week. 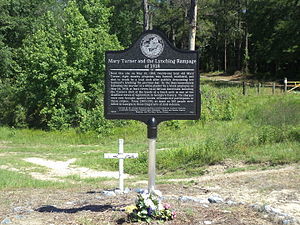 This landmark is actually in Lowndes County, not Brooks. She was likely lynched somewhere near the border of the two counties. 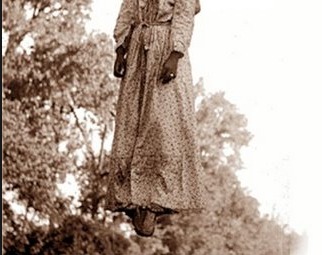 The Lynching Rampage of May 1918

Hampton Smith was a prominent white farmer who owned a large plantation in Brooks County. He often worked with the court house by getting convicted persons of color who were unable to pay their fines to come work it off on his plantation. Sidney Johnson was one of those cases. He admitted before his death that he alone was responsible for killing Mr. Smith, and reportedly made statements to several people about that fact. Mr. Smith had a terrible reputation for poor treatment of his enslaved employees. One night, Smith was killed by gunshot, and his wife was also shot in the chest, however she made a full recovery. There was an uproar in the community as mobs formed from both Brooks and Lowndes counties to uncover the murderer.

Will Head was the first victim, and later that day his brother-in-law Will Thompson was also lynched. They were killed outside of Troupville on May 18, 1918. Reports say hundreds of bullets were fired into the two. The next victim was Hayes Turner, who was arrested on suspicions of involvement in the murder. According to a newspaper article from the Atlanta Constitution, Hayes worked for Mr. Smith, and the plantation owner refused him leave since he had not yet finished his contract. Turner confessed to there being a meeting at Will Head's residence to kill Mr. Smith, where they determined that Sidney Johnson and Head would shoot Smith while Turner would get Mr. Smith's gun. Hayes Turner was in the process of being transferred to a jail in Moultrie for safekeeping, when he was captured by a mob and lynched while still in handcuffs. His lynching occured on Saturday May 18, and on the following Sunday, crowds of people came to sightsee.

Another victim, Eugene Rice was lynched later that saturday, but the motive for this is unknown. He was never connected to Hampton Smith's murder. Mary Turner, wife of Hayes Turner, was lynched on Sunday for protesting the unjustness of her husband's death. Her lynching was so brutal and sick. She was hung upside down and covered in gasoline, then lit on fire with a match. As she was burning, her unborn child was cut from her womb with a knife, and it fell onto the ground. Someone from the mob then crushed the prematurely born infant with their boot. After this, many bullets were fired into her as she hung.

The next victims were Chime Riley, Julius Jones, and Simon Schuman. Toward the end of the week, there were three unidentifiable Negroes whose bodies were found in the river. It is not known if they were connected to the mob lynchings.

Sidney Johnson was caught in Lowndes county hiding in the house of John Henry Bryant. There was a shootout with the police, and afterwards, Sidney Johnson was found to be dead by gunshot inside. His body was then desecrated and dragged through the city by a noose around his neck, before being hung to a tree and lit on fire. 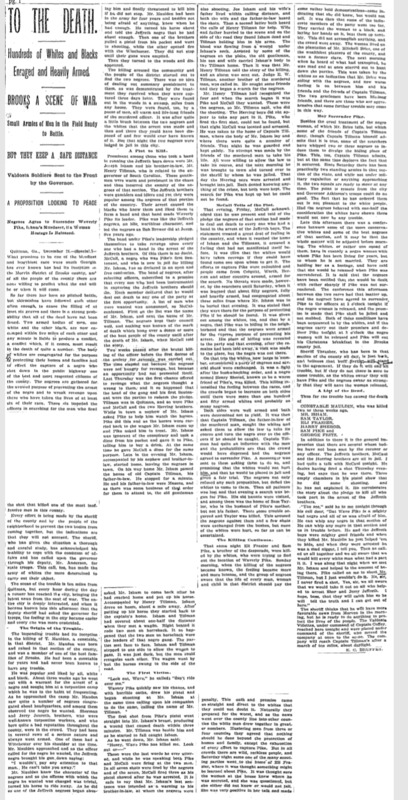 After Waverly Pike, a black man from Brooks County, killed Joseph Isham (Isom, Ishom) a mob formed to try to track him down. Harry Sherod was killed as the result of a gun foght between the mob and a group of black men. Sam Taylor was the husband of Pike's mother, but not his father (step-father). He was killed in one of the places the mob went looking for Waverly. Eli Frazier and Sam Pike, Waverly's brother, were killed the same night by the same mob in separate incidents. The mob eventually grew to over 150 white men looking for Waverly Pike, but if he was found, it was many days after the events on December 23.

Tom Miller was lynched on the farm of S.S. Rountree. He was accused of attempted rape, but by the victim's account it was too dark to determine the assailant. Citizens of the area formed a mob and strategized how to find the perpetrator. Eventually, they found Mr. Miller was likely guilty after "confronting him with the facts," and he was carried 100 yards from his home and shot with over 100 bullets according to the report. 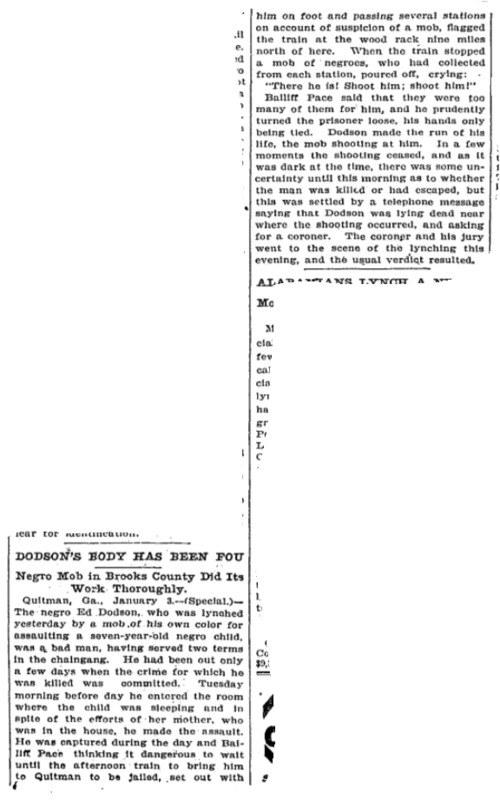 Ed Dodson was lynched by a mob of negroes for assaulting a 7 year old child while she was sleeping. He had previously served two terms in a chaingang, and he had a bad reputation around town. He was captured by a baliff named Mr. Pace, who thought it would be too dangerous to brring him to a jail in the immediate area. Mr. Pace was attempting to bring him back to Barney, where his crime was committed. They passed several police stations en route to Barney, before they were met by a mob of blacks at the train in Morven, where he had no choice but to turn the prisoner loose. Dodson was shot dead multiple times during some point in the night, as his body was found the next morning.

Henry Isaac (Issac) was found at the bedside of the young daughter of a prominent white man at the time. He was chased into the woods by a mob where he was hanged and shot. 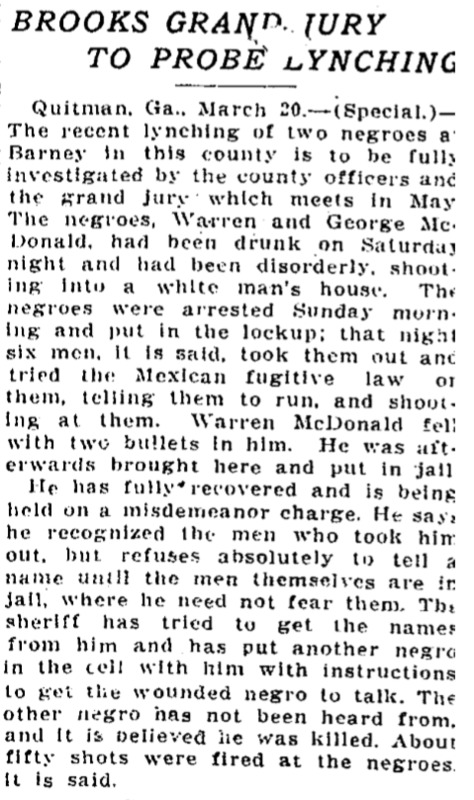 George McDonald and his brother, Warren, were drunk and shot into the house of a white man which led to their arrests the next day. That night, they were removed from the jail and told to run while being shot at. Warren survived and was charged with a misdemeanor. George was not heard from again.

Jesse Stater was lynched for writing an insulting note to a white woman. He was dragged from his home and shot to death by a group of people with a "powerful searchlight" as told by his father.

MaryTurner.org lists these two men together, meaning they were killed in the same incident on this date in Brooks County. However, after checking several newspapers from the year and other databases, it appears that the Aaron Birdsong that was killed in 1921 was killed in Oconee on December 4th.

"Mrs. Hamp Smith, Formerly of This Section, and Her Husband Victims of Atrocious Crime in Brooks County." The Butler Herald, May 23, 1918, XXXXII ed.

"South Georgia Farmer Is Shot from Ambush." The Atlanta Constitution, May 18, 1918.