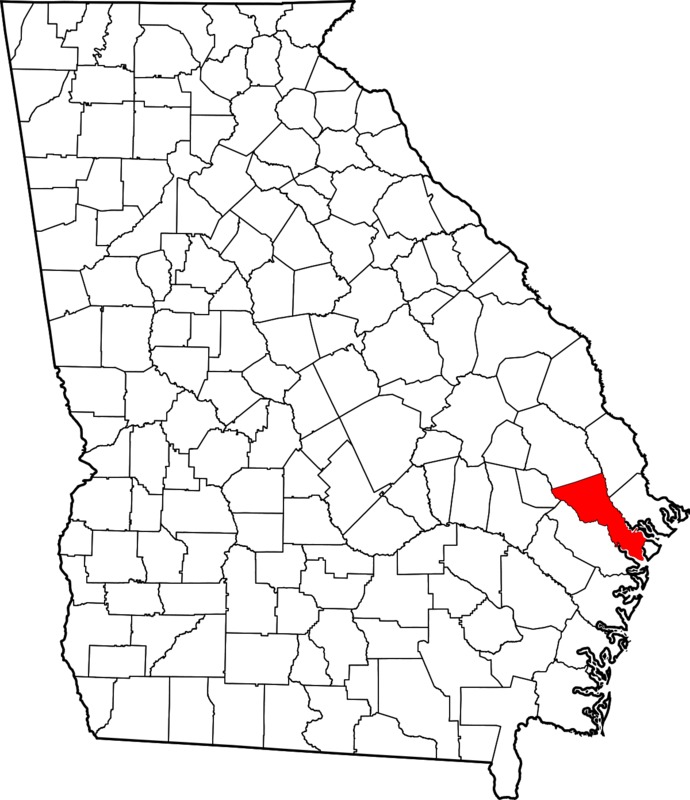 Bryan County is located in the south eastern region of Georgia and was founded on December 19, 1793. Between 1900 - 1910 there were 6,122 living in Bryan County according to their census. The county was made up predominantely of farmers and freed slaves or low wage workers. The culture of lynching that existed within Bryan county between 1880-1940 was part of a much larger issue of racial discrimination, white mob violence and terrorism, and institutionalized injustices that were largely acceptable throughout the south during this time period.

Headline of Article about Moody's lynching

John Moody was lynched in Bryan County on February 28, 1901. Moody was lynched after quitting his job with his employer and going to work for a neighboring farmer. His original employer became enraged that he went to work for someone else, gathered some friends in the Ku Klux Klan, caputred Moody, shot him and then hanged him. This is considered a private lynch mob because it was an act of revenge and was not a public lynching. As noted in Smangs 2017, Doing Violence, Making Race, "Private lynch mobs were sometimes composed of white landlords, employers, and their companions aiming to settle labor disputes with black tenants and workers by violent means."

Moody's lynching was reported in The Atlanta Constituion on March 1, 1901 which detailed the nature of the lynching, "Incensed by the negro leaving him to go to the other, the farmer who first employed [Moody] organized a band of his friends, all of them sworn to punish the negro. Each member of the band thoroughly disguised himself and at the dead of night they rode to the plantation to which Moody had removed. They went to Moody's house and dragged him forth. To a tree that stood conveniently near they hanged him, and shots were fired into his body."

This type of mob violence speaks to a much greater theme of white terrorism that existed within Bryan county, the state of Georgia, and the southern United States during this time period. Moody was killed for something that was not even illegal, but simply enraged his former employer. This type of behavior in modern day society would attracrt national outrage and attention, but only warranted a single report in the state news paper. Moody's lynching is a clear example of the fear that black Americans were forced to live in even if they obeyed the law.

Joe Washington was lynched on August 10, 1901 in Bryan county for an attempted rape. There is little information available about the way in which Washington was lynched or the details of the case but it was documented that his murder was a mass lynching. It is important to understand the way in which different types of lynchings were used to terrorize blacks in different ways during this time. One of the most common reasons for lynching was attempted rape or rape and these types of accusations often led to a mass lynching. Mass lynching was a very public display of lynching that many families would attend and celebrate, and was also a clear act of terrorism towards all blacks. It should be noted that the frequency with which blacks were lynched for rape or attempted rape does not indicate that these black men were frequently raping white women. There was no formal trial or investigation, and a black man could be lynched and accused of attempted rape for simply looking at a white woman the wrong way. This further exemplifies the culture of lynching as a form of white terrorism. 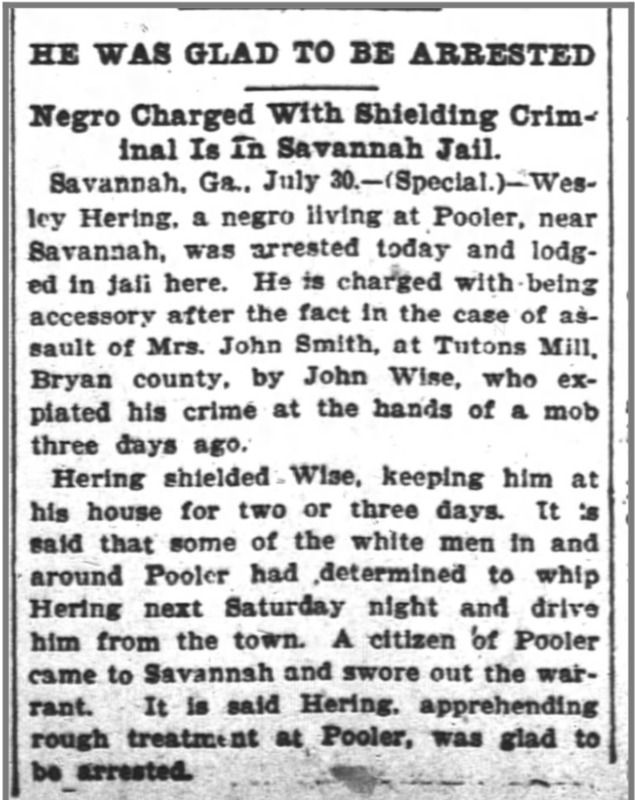 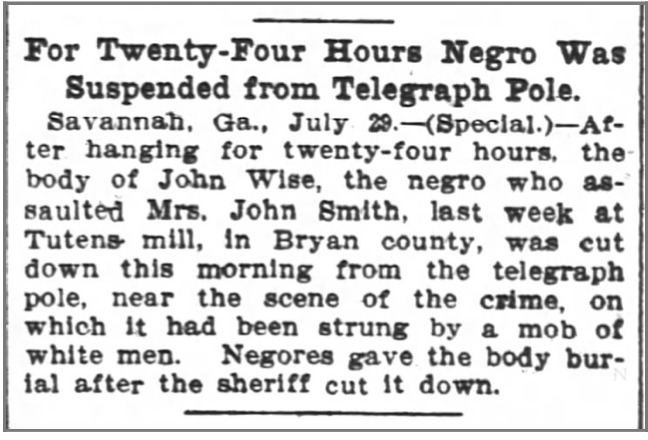 John Wise was lynched on July 28, 1902 in Bryan county for the rape and assault of Mrs. John Smith. The alleged rape occured at Tutons Mill in Bryan county and a private lynch mob was gathered to capture John Wise. After he was captured, he was suspended from a telegraph pole and left hanging dead for 24 hours before he was cut down and put to burial by other blacks in the community. This lynching is another clear example of the way in which the culture of lynching allowed a dead human to hang in the streets for 24 hours before anyone thought to cut him down and put him to rest. It also shows the way in which lynchings were used to intimidate and instill a sense of fear into black residents.

Lynching was used as a form of white terrorism and violence towards blacks in Bryan county and despite only finding three counts of individuals who were lynched, it is fair to assume that there were many other blacks who were lynched. Being black in America, especially the south, during this time essentially meant that your life was in constant danger and could be taken violently simply because of white rage. It is important to note that in none of these instances of lynching is there any mention of the type of punishment that the white mobsters received. Lynching was normalized and considering the small amounts of reporting that occurred for these incidents, it is safe to assume lynching was a fairly normal occurrence in Bryan county.

5. "Moody Lynched in Bryan County - White Cappers Hang Him to Tree Near His Hut." The Atlanta Constitution(Atlanta, Georgia), March 1, 1901.

8. "Party of Nine Shoot a Negro - They Leave Him for Dead on Ground Where He Fell." The Atlanta Constitution(Atlanta, Georgia), July 29, 1902.