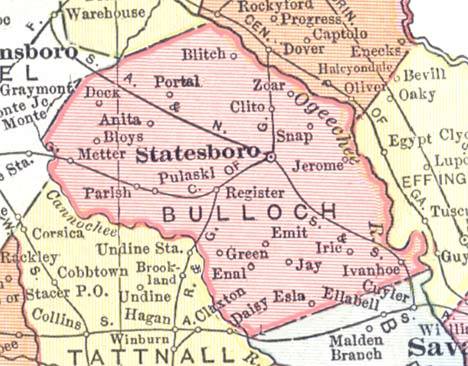 It is crucial to comprehend lynchings were a cultural norm and in many cases seen as a social or family event, they were still reported in the newspapers. The accuracy of the facts and the descriptions of these murders go to show that lynchings were not so much a critical news story. In many cases names were misspelled or not correct at all. Beyond slight altercations to names, some newspapers and reports of lynchings do not give a reasoning behind the lynching. Some even say, “attempted” in front of the crime. In modern America, some “attempted” crimes go completely unpunished; yet during this era of racially justified murders, a black person looking at a white woman the wrong way or being thought to have committed a crime seems reason enough for death.

Another important aspect of these lynchings to consider is that the normal portrayal of lynchings as a man being hung by a mob of men is not the only action taken during this murder. Nor is this image a reflection of all lynchings. A lynching could be a mob of people in a social-like atmosphere with a black man’s life as the centerpiece to the party celebrating racial hierarchy and other times it is a private few murdering as a way to keep a person of color in their set place; that place, of course, being subordinate to whites. These murders do, at times, reflect animal-like behavior towards the victim and violation of their bodies prior to actual death. Miller wrote:

There were different kinds of lynching. The most frequent variety was the one we know the least about, indeed might never know about. These are the countless hangings, garrotings, burnings, shootings, or other means of murdering people away from public view. We might discover the body but rarely learn about when, why, and by whom the lynching happened. Rather than conduct their terror in public view, the lynch mob concealed its identity. Such private affairs became more common as public lynchings became less “respectable” after World War II and as political intimidation rather than “rough justice” for some alleged trespass of racial lines was the principal reason for the violence.

The nine cases of known lynchings within Bulloch County vary on the information known, the severity of the murder and the justification behind the action taken. 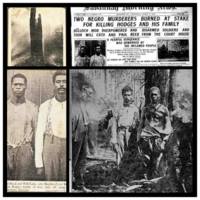 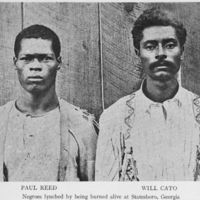 The lynchings of Will Cato and Paul Reed were the most publicized of all the Bulloch County lynchings. The two were killed together in 1904. The news reported on the plans of the lynching prior to its actual occurrence. The sheriff of the town felt that even though he did not have any fondness of the black men that it was his duty to uphold the law and move the men to Savannah, away from Statesboro, in order to keep them from being killed before they had been put to trial. They returned to Statesboro and the two were confirmed guilty with the help of their wives’ testimonies from the night of the crime.

The Murder of the Hodges' Family

This was the most publicized and acclaimed lynching because of who the crime was against. The Hodges family was one of the most well known families in the area. The two black men were supposedly looking for hidden money on Henry Hodges’ farm and when the farmer came up on the two men they killed him. His wife came to his aide and they proceeded to kill her as well. They then go on to burn the Hodges’ home that has their two infant daughters inside. After thinking the crime was fully committed, the two men see a young girl, named Kittie, outside hiding. They kill the child by smashing a lamp over her head. The evidence was the left behind shoe at the burnt house, which authorities found the match for at the home of Paul Reed. 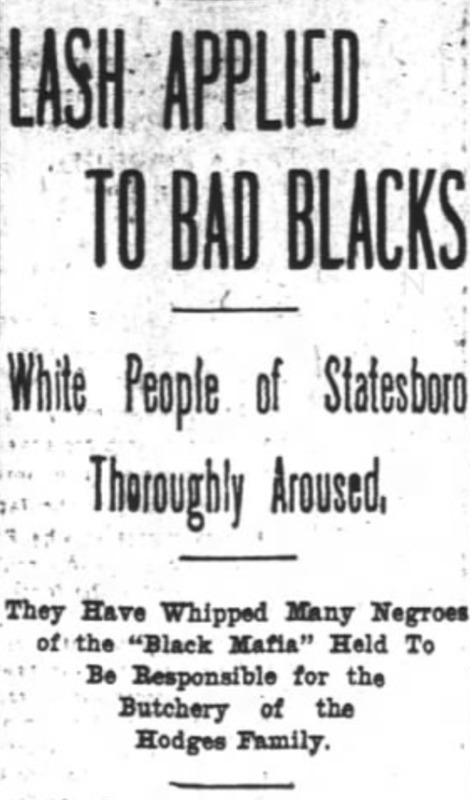 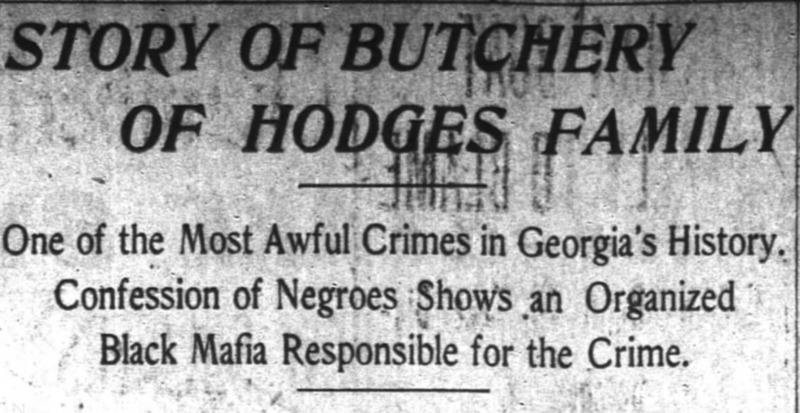 Phillip Gathers was lynched June 20th of 1960. His lynching seems personal not only because of the horrific pretense of his death but because it was less than one hundred years ago.The Atlanta Journal reported the lynching on the very next day and the report read, “Four young women from the crowd pushed their way through the outer rim of the circle and emptied rifles into the negro. They stood by while other men cut off fingers, toes and other parts of the body and passed them around as souvenirs.” The Constitution reported in their October 19, 1920 edition that Gathers was lynched in broad daylight. The lynching was a result of the murder of a woman named Anza Jaudon. Reports of the crime and the process of finding him before his lynching were reported in nearly every state in the south along with a report in London’s edition of The Guardian. 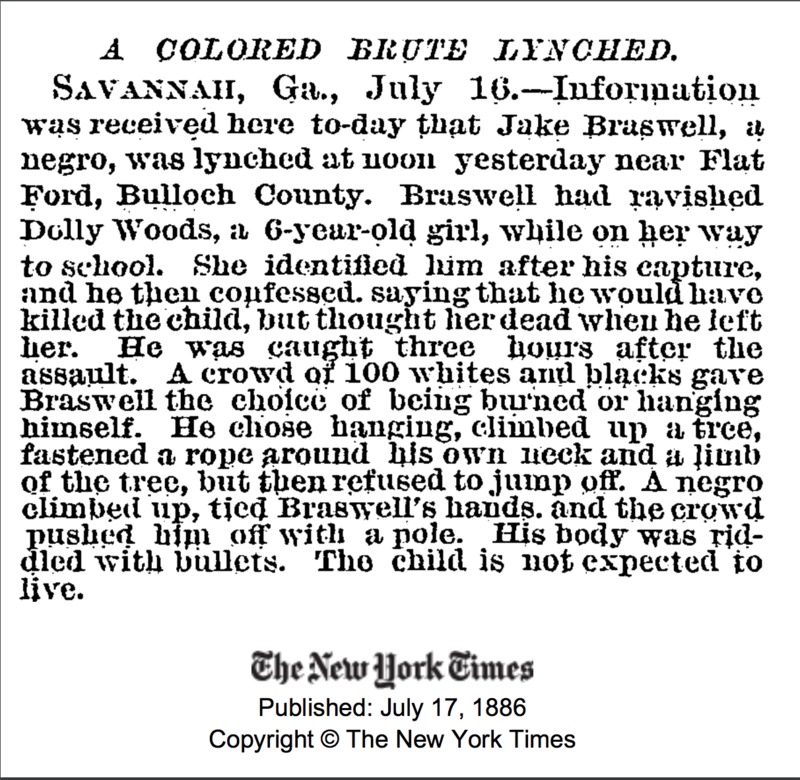 Jake Braswell was lynched near Flat Ford in Bulloch County. His lynching occurred on July 16th of 1886. The New York Times reported the occurrence the very next day. The headline was, “A Colored Brute Lynched.” A brute is defined as, “a savagely violent person or animal.” The lynching of Jake Braswell was due to his accusation of rape. The rape was alleged and never confirmed. The news article in the New York times states that the lynching denoted a black mob.

The lynching of Albert Rogers and his seventeen-year-old son is an example of a racial murder led only by upholding white supremacy. The two were "riddled with bullets" while sitting on their front porch.

Kennedy Gordon is a case of "attempt" and "suspicion." He was found missing after being arrested in suspicion after an attempt of assault. There is not much known other than that there were shots heard. He was thought to be dead, but according to the newspaper clipping, he turned up to have his wounds dressed by a doctor. Gordon is still addressed as a case of lynching in Bulloch County because it is uncertain of whether or not he died. 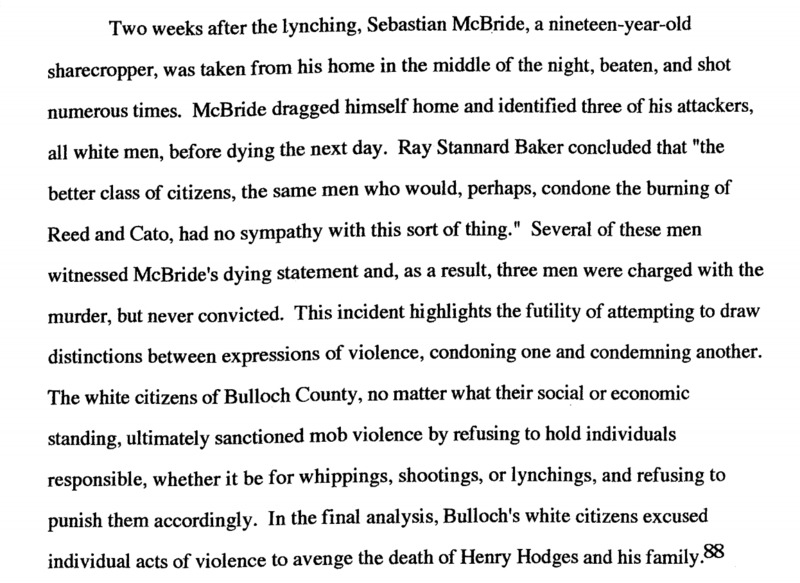 At nineteen-years-old Sebastian McBride was lynched. He was thought to have been taken, beaten, and shot multiple times. His reasoning for being lynched is just an association with the Hodges' family murder although the direct correlation to that murder is unknown. He survived his shooting long enough to identify his three perpetrators who were charged but not convicted. 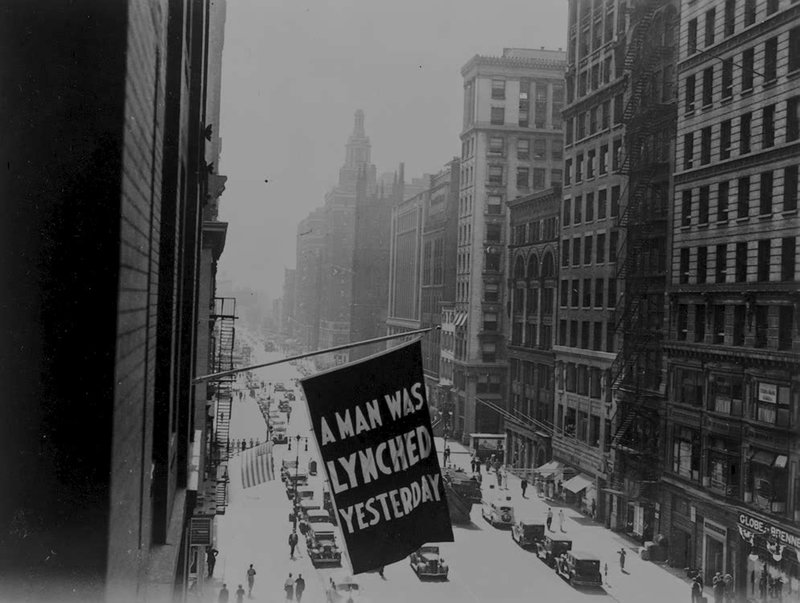 This flag flew outside the NAACP headquarters in NYC in 1936.