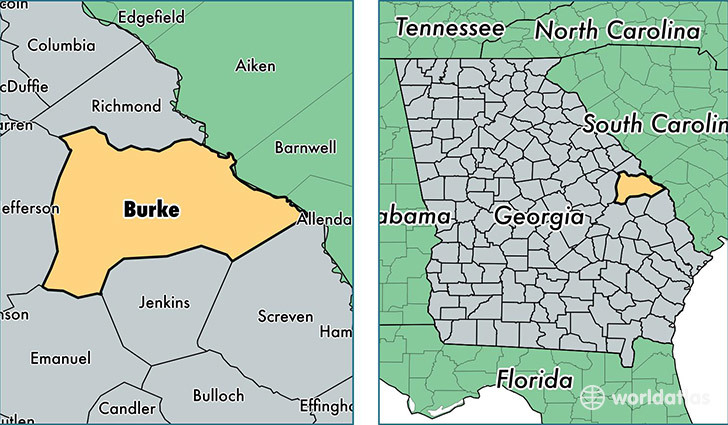 Map of Burke county, and its general location in the state of Georgia. 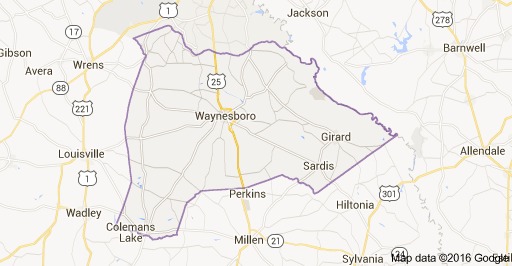 This is a detailed map of Burke county showing the cities of Waynsboro, and Millen.

Burke County is a pretty large county, located in the Eastern part of the State of Georgia. It is located right along the Atlantic Coast, and near the Savannah river. Burke County was founded on Feburary 5th, 1777. The county was named for Edmund Burke who was a strong spokesperson for the county in its early days. The county itself really grew economically during the Antebellum period. The state's growth was largely atributed to slave labor that built large cotton plantations. For the longest time the black population was larger than that of whites in the county. During the civil war most white inhabitants clearly supported the confederacy, and fought for "the south" during this time. After the civil war the economy, and population really took a hit in Burke county as free blacks now left to seek refuge in the north. This migration of blacks out of the south was a major blow to counties like Burke county who depended on their labor. Today, Burke county has a population of 23,316. This population includes a pretty even number of blacks, and whites. The county of Burke also houses the city of Waynesboro, and right outside the county line sits the small community of Millen. Both of these places are important to the stories of our lynchings.

Revenge: Sherman's March to the Sea 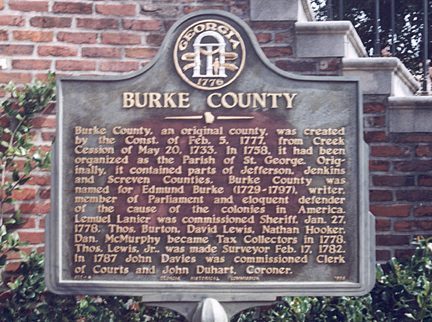 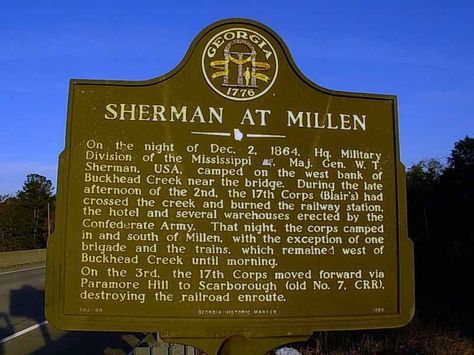 During my research I have really examined the history of Burke county, and I have tried to create a story or narrative of why these lynchings may have taken place. I have discovered that the location of Burke county was right along the path that General Sherman took on his march to the sea. If you will recall, the march to the sea was really what did the south in during the war. It was the final blow to the confederacy that really ended the war. On his way to the Atlantic ocean General Sherman went right through Burke county, and the city of Millen which was then part of Burke county. Along the way General Sherman burnt down big chunks of the city of Millen, and parts of Burke county in general. These historical markers talk a little bit about Burke county, and General Sherman's march to the sea in Millen. On this same note, I have had the privilege of visiting Burke county, and the town of Millen. On this visit I heard two or three times about Sherman's march to the sea. During my research, I have seemed to come to the understanding of a certain narrative that has been created in Burke county. That narrative is along the lines of revenge. The people of Burke county were very angry that their town had been destroyed during the war. They also began to feel very frustrated with how their economy began to decline after the blacks left. I believe this anger, and frustration led to the lynchings of the four people in Burke county. Later on I will cover three of the four lynchings that took place in Burke county. In the pursuit of revenge I have noticed that in all my cases the local law enforcement has had custody of the perepetrator, and has subsequently "lost" them. It appears that even the law enforcement was ok with the events that transpired, and made no efforts to stop them from happening.

A Dark Mark in America's History 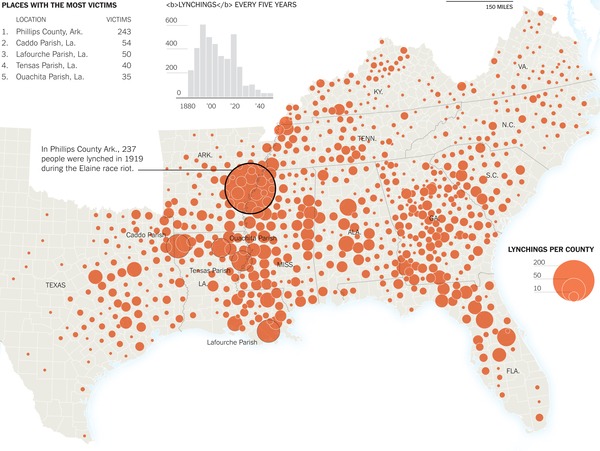 A map of lynchings that occurred during a 73 year time period in America's history. 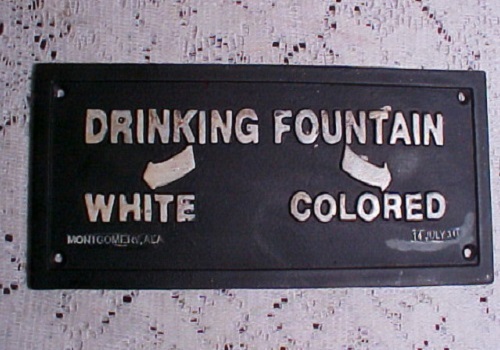 A common sign found during the Jim Crow Era. 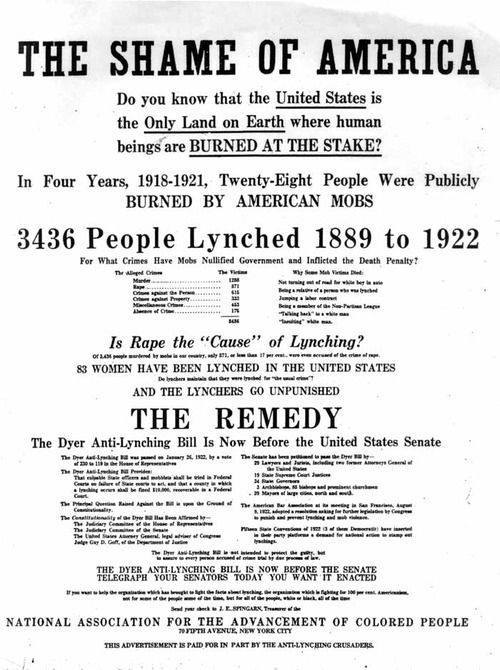 After the civil war, and reconstruction periods in America's history the citizens of America still found theirselves trying to pick up the pieces left after war. In 1877 America entered what is known today as the Jim Crow era. During this time blacks were treated in a horrific manner by groups of white people mainly in the south. By far the worst thing that developed during this time period was the common practice of lynching. Lynching was the act of brutaly murdering a black person, often done by large crowds. These lynchings were the result of black people "breaking" laws. They then become subject to these murders in the name of justice. To the left is a map depicting the geographic locations of places that had more than one lynching. These lynchings primarily occurred in the seventy-three year period from 1877-1950 known as the "Jim Crow Era". The bigger the size of the dots, the more lynchings that took place in this location. Here is a link to the NAACP website that gives more information on lynchings, and the Jim Crow Era in America. 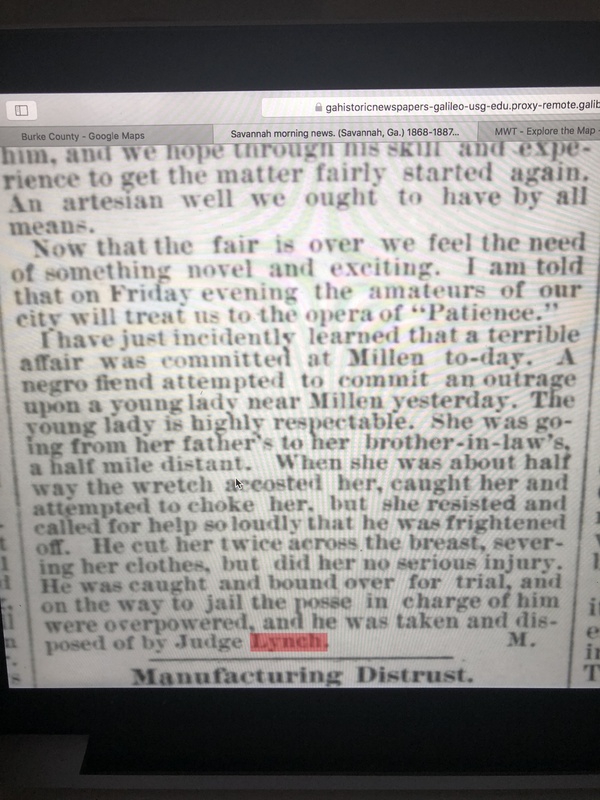 Newspaper coverage of the lynching of Richmond Roberts. 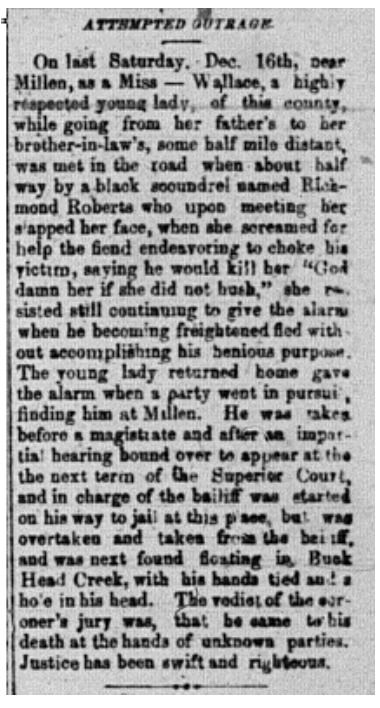 Newspaper coverage of the lynching of Richmond Roberts.

The first case of lynching that occurred in Burke county is centered around Richmond Roberts. The story of Mr. Roberts can be found in an issue of thr loacl newspaper The True Citizen. As the story goes Mr. Roberts was accused of rape on December 16th 1882. On that night Misses Wallace was leaving her father's house to make a quick trip over to her brother in law's house. On this trip she claimed to have been attacked by Mr. Roberts who she said tried to rape her. The local authorities arrested Mr. Roberts, and were planning to take him to the local jail. The next day, on the way to the jail house they were met by a large mob who overpowered the law enforcement. After this the large mob took Mr. Roberts tied his hands together, and drowned him in Buckhead creek. Looking at this article I think it is important to note that there are very few details regarding the actual circumstances of the lynching, and that they were much more focused on the attack. They also referred to Mr. Roberts has a "negro fiend" portraying him as less than human. It is also important to know that there was just one little article in the newspaper about Mr. Roberts, and the newspaper at the time was primarily concerned with the local election that was taking place during this time.

The coverage of the lynching of S. Wilkinson can be found in The True Citizen in a September 1886 issue. The events surrounding Mr. Wilkinson took place in the small town/city of Millen, GA. Right off the bat you can see how little southern whites cared about the victims of their lynchings in this case. This is due to the fact that they do not have a first name for Mr. Wilkinson on file. Throughout the article the writer also often refers to Wilkison as Wilkerson, not even having the curteousy to get his name correct.  His story is also one that shows the true violent nature of the lynchings that took place and how many white mobs did not even wait for the full details on the case to come out before lynching someone. Mr. Wilkinson was simply found with the gun on him that was used during the reported crime, and was put to death by a mob of fifty people, who shot him, and then proceeded to hang him. His charge was attempted rape, and the claim was that on September 14th 1886, Mr. Wilkinson attempted to rape Mrs. Thomas Willis and Mrs. Rogers. The next day Mr. Wilkinson was spotted by a man named Edward Foy who claims that Wilkinson had the weapon that was used in the attempted rape. Mr. Wilkinson was taken into custody for questioning, and "protection" until the details could be sorted out. While he was in custody the previously mentioned mob overpowered the three guards working at the prison, and took the life of Mr. Wilkinson into their own hands. Based off the newspaper clipping it seemd like the true perpetrator of this crime was a Mr. Wigg, who may recieve a similar fate if he is caught.

Newspaper coverage of the lynching of General Williams.