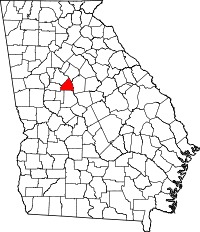 Butts County is located in the central part of Georgia and was created on December 24, 1824. Despite being established as Butts county in 1824, the area had a long history prior to the estabilshment of the county. It is important to note that many of the cities within Butts county were destroyed by the army of General William Sherman in his March to the Sea during the American Civil War. Butts had a hard time becoming stable again, both economically and socially. Butts did not begin to regrow it's economy until the 1880s, shortly before the documented lynchings took place. 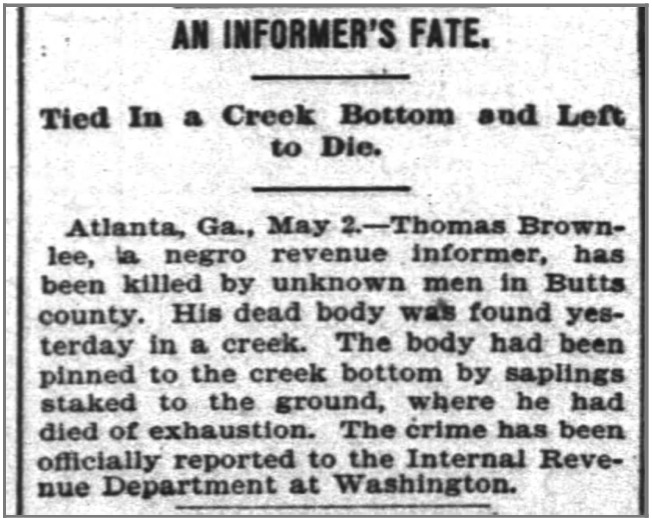 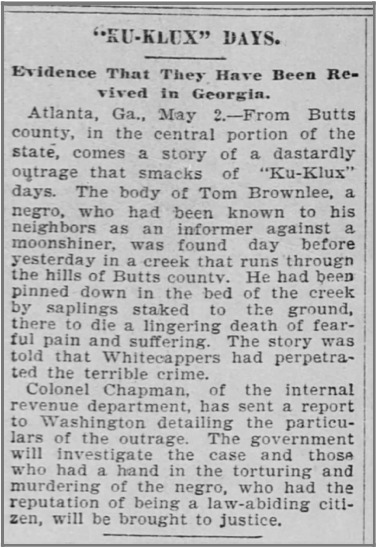 Thomas Brownlee was lynched in Butts County, Georgia on May 2, 1895. Brownlee's body was found in a creek that runs through Butts county after being pinned down alive to the bed of the creek to drown. It should be noted that none of the newspapers that reported on this lynching were local Georgia newspapers, and instead were those from other states in the U.S. Brownlee was lynched for being an informer against a mooshiner. Moonshiners were individuals who illegally produced a strong form of alcohol known as moonshine. If the allegations of Brownlee being an informer against a moonshiner are true, it is interesting to note then that in this case, an individual was lynched for following the law. This is another clear example of the way in which black Americans had to live in fear of their lives everyday, whether they abide by the law or not. Brownlee's lynching was acceptable because he went against someone's business, despite their business being illegal.

Butts county Georgia, much like the rest of the south, struggled with many racial injustices and a general theme of white violence. The two examples of lynching that occured within the county limits are likely not the only lynching that occured. It is alarming to think that an individual who was murdered is still identified by many databases as "unknown." This shows the culture of lynching and the extreme unimportance that was given to black lives. Without any identifying information, it is likely that this individual who was lynched will never be identified. Butts county Georgia is unique in the sense that it was destroyed during Sherman's March to the Sea and the institutional issues it faced after it's destruction likely affected the political climate and nature of lynching. For example, with this destruction came great economic hardship, and there may have been a rise in lynching related to blacks "taking" jobs. While it is hard to prove this because of the lack of information, it is safe to assume that there were far more than two people lynched in Butts county.

5. "Moody Lynched in Bryan County - White Cappers Hang Him to Tree Near His Hut." The Atlanta Constitution(Atlanta, Georgia), March 1, 1901.

8. "Party of Nine Shoot a Negro - They Leave Him for Dead on Ground Where He Fell." The Atlanta Constitution(Atlanta, Georgia), July 29, 1902.