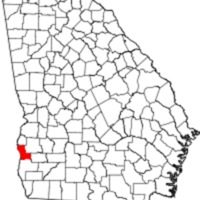 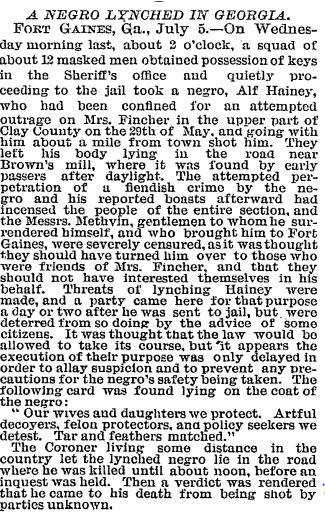 Alf Hainey had been taken into custody after an “attempted outrage” on a white woman, Mrs. Fincher. Twelve masked man took from his jail cell and shot him in the road and then left him there. The mob had originally come and tried to take him but were deterred by some local citizen to let the courts handle it. They were, however, only delayed and returned and took him from his cell. Left on Hainey was a note that read:

Our wives and daughters we protect. Artful decoyers, felon protectors, and policy seekers we detest. Tar and feathers matched.

This letter shows that the mobs seeking “white justice” would even target their local citizens and officials if they attempted to stand in their way. Hainey’s body was left in the street until noon and a verdict was released stating that he was shot by “parties unknown”.

Daniel "Dan" Buck was murdered on June 30, 1891. He was accused of attempted rape after allegedly invading a white girl's bedroom. He was twenty-five years old when this took place.

George Thomas was murdered on September 21, 1911 in Fort Gaines, GA for attempted murder. He was accused of attacking the sheriff with the intention of killing him. Thomas was arrested and then taken from the Sheriff's custody and shot to death by a mob.