article on the lynching as it appeared in Weekly Constitution

Millie Johnson an the Thompson family (1880)

Millie (Thompson) Johnson, along with the rest of her family which included her mother and father -Joe Thompson-, her brother Bob, and her two own children, lived in small log cabin a few miles outside of Jonesboro. Sometime in the early morning hours of July, 29th 1880 their cabin was approached by a torch-weilding group of armed masked men, who demanded entrance into the cabin. Being denied, the men preceded to try and forcibly enter the home. One man made a hole in the wall, aimed his gun through it and fired. The bullet struck Millie in the head, covering her nearby children with blood killing and killing her in matter of moments. After this, the hooded men broke down the cabins door and began to beat both Joe and his wife. Bob Thompson, attempting to come to the ais of his parents, was also shot in the struggle but not fataly so.

In the immedate aftermath of the crimes, their was a degree of local support for the Thompson family. Despite their masks, Joe Thompson was able to identify several of the men who attacked him and his family, and belived that their motivation was himself tesifiying against a local white man in a legal preceding. Chargers were filed against some of the Thompson family assilants and trials held, but none were convicted. 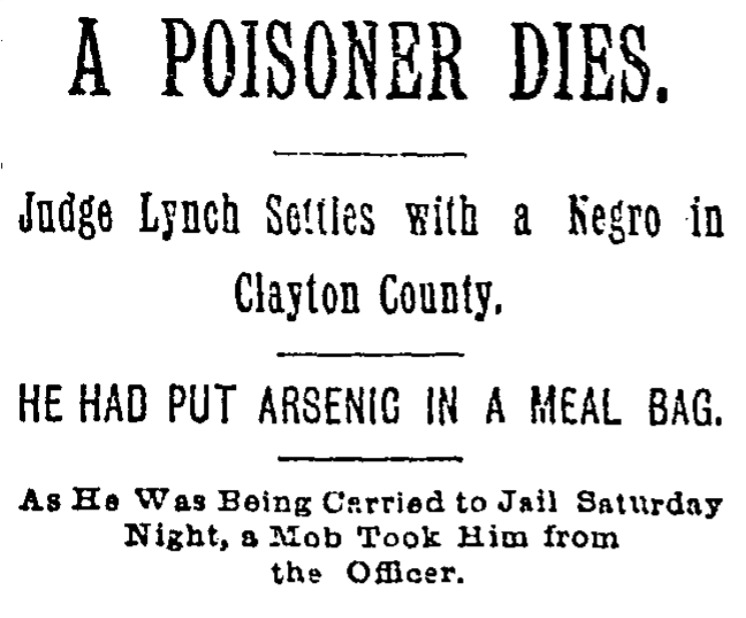 Article on the lynching in the Atlanta Constitution

Arthur Bennett, a farm hand, was accused of the poisoning of a local white man, Joe Burk, and his family with arsenic. Bennett's supposed motivation for this action was that he was attempting to get back at Burk for chastising in regards to some cotton. Bennett was arrested for the crime and brought into court where he confessed his guilt in the poisioning, but stated that he had been hired by another black man to preform the act. Upon Bennetts attempted transport to jail on the night of October 21st, 1893, a mob of masked men foribly removed him from the protection of the town constable and killed him. Govenor William Northen offered $200 dollar reward each for the lynchers on November 2nd. I found no evidence that is reward was ever collected