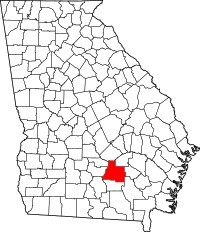 Coffee County sits in south east rural Georgia. It’s largest city is Douglas. Most of the people who lived in Coffee were farmers or terpentine workers. The lynchings in this county are best characterized as the local towns people carrying out their own “white justice”. They would disregard the law and sentence people to death on their own accords.

Allen Crosby went to arrest a black man for a petty crime, this man had a gun claimed by Marshall Jones in his possession. The next day, Jones went to claim his gun and got into an argument with Crosby. Jones shot Crosby in the leg and a white man caught Crosby’s arm which kept him from fatally injuring Jones. Then a black, West Brown, man took Crosby’s gun and assaulted him with it. Crosby and the other white man fled since they were unarmed, but Brown shot and killed Crosby. Brown fled, and Jones was apprehended; at around 1 a.m. a large mob demanded to take Jones out of the jail. They took him not too far out of town, tied him to a tree, and shot him to death. 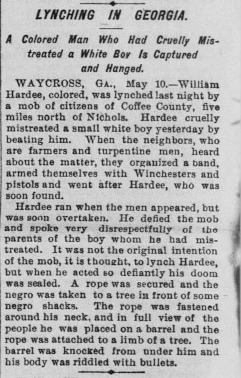 In Waycross Georgia William Hardee was lynched by an angry mob, from Coffee County, who sought him out after hearing that he had mistreated a white boy. The accusations consisted of him flogging, choking, and beating the white boy. The group of men, farmers and turpentine workers, collected their guns and banded together in search of Hardee. The found him quickly and Hardee attempted to escapes, but he was outnumbered. The article claims that the mob’s original intention was not to kill Hardee, but he began to speak disrespectfully of the parents of the boy. The mob then decided to take justice into their own hands. He had a noose fasted around his neck and when they knocked the barrel which he stood on from underneath him he was riddled with bullets.

Dave Wright was arrested after Zelphie Rollins was shot. Wright had lived with her and it appeared as if they had gotten in an argument after accusations were made about whiskey being made in the house during prohibition. A few days after being arrested a mob of masked men arrived at the jail took the keys from the sheriff and dragged Wright out of his cell and then shot him to death.

This case is different from others, not just because it was a white man, but because it was the first lynching of 1926 and the first lynching to obtain convictions within 90 days of its occurrence. Major Brown, who was the brother-in-law of Rollins, was identified as the leader of the mob. He plead guilty to the crime and was sentenced with life in prison. Eight other men then also plead guilty, but since they were not the leaders their sentences were much less severe, ranging from four to twenty years. The court was commended for its quick action and its commitment to justice through the courts.

In Douglas Georgia, three people were shot to death on their way to prison when a mob intercepted them. The woman they had been accused of killing, Pearly Harper, was a relative of the sheriff. It was reported that Willie shot Harper and then Minnie struck the witness, Tom Hutto, with a bottle. The Deputy Sherriff Wiggans attempted to bring them to Ocilla, but seven miles out the road was blocked by a car across the highway. He was forced to hand over Willie, Minnie, and Will, and then the mob shot them in the street.

In Hazelhurst, Merchel was hanged and riddled with bullets after being accused of murdering a prominent businessman.

Johns was accused of arson and robbery.