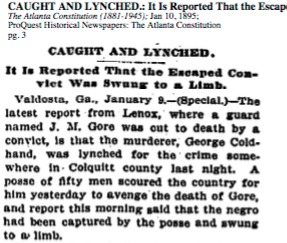 Coldhand was lynched on January 9, 1895, after allegedly murdering a guard named J.M. Gore. Coldhand was attempting to escape prison after confessing to killing a man in Alabama, a but because he was about to be identified he murdered Gore. Coldhand struck Gore in the back with an ax and then he stole a pistol and killed the guard dog. Its reported that a mob of fifty men went on a search for Coldhand and captured him the next day and swung him to a limb. 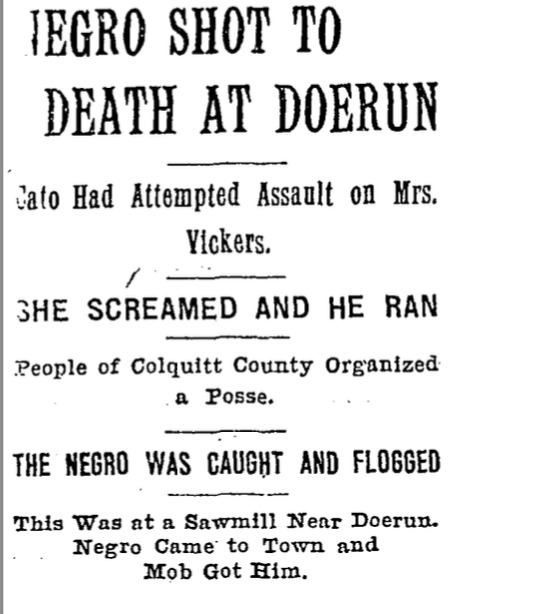 Bill Cato was a twenty-year-old black male who was lynched on August 18, 1900, in Doerun, GA. Cato was accused of attempted assault of a white woman, Mrs. Vickers in her home in the middle of the night. A search party formed and Cato was caught and confessed. The party decided to give him a whipping and he was ordered to leave the county, but he neglected to do so and was arrested and shot to death by a mob of seventy-five men.

"Mrs. Vickers is a respectable white woman and is liked by all who know her" - The Atlanta Consitution 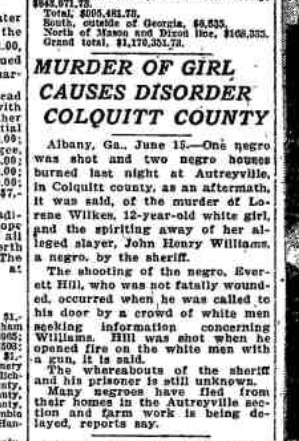 “Later the winds shifted and members of the mob, unaffected, recognized the hymn he sang as, “Nearer My God to Thee”’ - Ginzburg

Williams was lynched on June 20, 1921, for the murder of a ten-year-old white girl. Williams had been tried and convicted of first-degree murder and but maintained his innocence throughout. He was escorted out of court by twenty officers, however, he was handed over to an angry mob who tied Williams to a tree and put his genitals in his mouth then proceeded to set him on fire. The mob used Williams as a warning to the black community. They burned black churches, beat a black woman and her child to death, black farmer’s fences were destroyed, and wealthy farmers were chased from their homes.

Anderson was a twenty-six-year-old black male who was shot and killed on July 24, 1922, for the attempted assault of a 15-year-old white girl

Davis was a 62-year-old black male shot and hanged on July 14, 1922, in Miller, GA for fathering a chilled with a white woman.

An unknown black male was hanged and riddled by bullets on November 5, 1896, for raping a married white woman in Lincoln, Georgia.