Article on the lynching in The New York Times

Prior to his lynching, Thomas Brantley was a man of some station in Decatur County. Orginally from Alabama, he had married into a wealthy family via the widow of a local doctor. Despite this, Brantley was a serial practicers of domestic violence, which would eventually be his undoing. Approxamitly a week prior to his death, Brantley went further than he ever did before. According to his wife, he repeatedly hit her with a wip braking bones and leaving bloody wounds all over her back. He preceeded to pour turpintine into her wounds, causing further excruciating pain. After the brutal attack, Brantley's wife -who previously had not told anyone about her husbands abuses- excaped to her brother's house for refuge; Thomas Brantley was arrested the following day. Outraged by the savagery of the crimes, a masked mob of local towns people stormed into the Bainbridge Jail on July 29th, 1885, drug Brantley out, hung him from a tree, and shot him numerous times.

Article on the lynching as in The Atlanta Constitution

Some time on the night of August 28th and the morning of August 29th, 1891, Cato Simmons's was shot to death in his own home by a group of individuals with is wife lying beside him. The most likely cluprets to the crime were a handful of black men whom Simmons, a promeninet member of a local black church, had had arrested for disrupting a church function prior to the nights events. 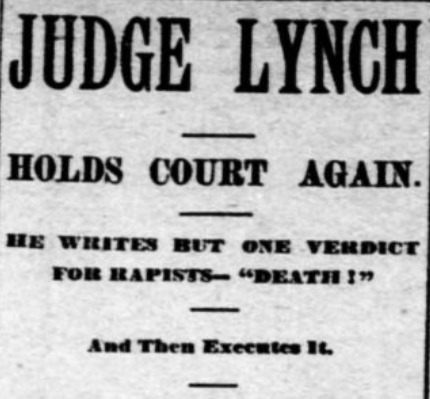 headline of an article on the lynching in the Bainbridge Democrat

Belived to have raped a white woman named Mrs. Sellers, he was arrested after a brief investigation into two other black men. Thomas was belived to be the rapist and not the two others because he bore scratch marks on his body which Mrs. Sellers said she inflicted upon her attckers body. Thomas was taken before a court where he said he was guilty of the crime. Many in the court wanted to see the man immdetaliy executed, but for the time being it was desided to let Thomas be punished through the legal system. He was trasported via train to the nearby town of Wigham to await his custody being turned over to the county sheriff. Hours before the sheriff arrived, however, an angry mob stormed the caboose that Thomas was being kept in and shot him several times. Slowly dying from his wounds over the course of hours, Thomas was hanged from nearby tree by the mob. 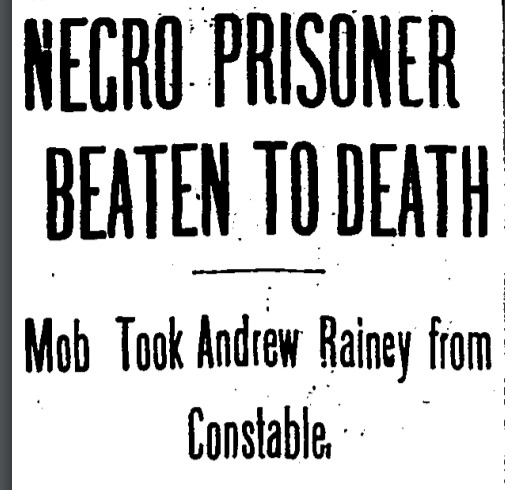 Headline of article about the lynching in The Atlanta Constitution

Rainey was arrested on charges of arson and was placed into the custody of local authorites. On April 21st, 1903 Rainey was removed from custody by a mob and badlt beaten. He was then take to jail where he died from his injuries.

After allegedly murdering the Decatur County Sheriff, Goodman was dragged through town by a mob and lynched on November 4, 1905. The Atlanta Constitution wrote that the sheriff was attempting to arrest Goodman when he fatally shot him. Goodman was being arrested for shooting a woman earlier that day. According to the story, the mob stormed the jail to retrieve Goodman when they learned that the sheriff would not recover from the gunshot. The mob hung him on a tree close to a river and shot him repeatedly.

On October 8, 1905, Tom Seabright was accused of raping two young African American girls and was almost immediately lynched. Newpaper articles claim that Seabright was lynched by members of his own race. When people heard of the accusations, a large mob of black men formed to find Seabright. Two different articles state that officers approached the mob and the mob insisted on "taking care of Seabright" themselves. The Atlanta Constitution wrote, "In an orderly manner they took him from the officers and strung him to the nearest tree." The mob took Seabright away, hung him on a tree, shot him multiple times, and left his mangled body hanging on the tree. The Early County News claimed that Seabright was an ex-convict that was recently released before the alleged attacks.

John Warren was lynched on December 23, 1911 after being accused of murdering a white marshal in Decatur County. He was hanged and shot multiple times.

The Daily-Times Enterpirse reported that John Riggins was lynched after he was accused of raping a prominnent framer's wife. He had only been in town for a few days when he was accused. Riggins was positively identitfied by the woman and then taken to be murdered by a mob of farmers. The article mentioned how excited the whole county was for this lynching.

According the to Daily Times-Enterprise of Thomasville, Georgia, Moxie Shuler was accused of trying to assault a fourteen-year-old girl. The article states that the sheriff was called by the father of the girl to find Shuler then he was taken to the girl's house to be identitfied. The officers tried to, according to the article, take Shuler to the station without being seen by the mob that was looking for him. However, the mob saw him and overtook Shuler against the sheriff's wishes. They mob took Shuler away to be lynched. Travlers found him the next day hanging from a tree with gunshot wounds.

Today, these gross, horrific, unjust murders go largely overlooked. Even trying to find information about these people that were lynched is difficult because they barely made the news. In some cases even the victim's name is unknown. Overall, as a nation, we have done these vicitims and their families a huge disservice by not memorializing them as they should be. When the murders were reported in the news, it was usually inaccurate or full of assumptions. Society's perception of justice was grossly skewed.

The clip below is from a fictional movie called The Great Debaters, but it represents the continuous fear that black people had to endure simply for being black. It also shows how animalisticly white people acted towards black people. It is truly disturbing.