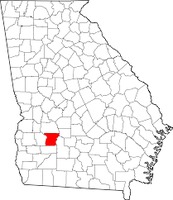 Overview: Lee County was officially established on June 9, 1825 and is currently located in southwestern Georgia.  Originally, the county consisted of area from Randolph, Terrell, Sumter, Stewart, and Quinton areas in Georgia. There is not enough information to confirm whether Lee County was originally named after Richard Henry Lee who was a proposer and signor of the Declaration of Independence, or Major Henry Lee who died on Georgia soil.  According to the 1830 census for Lee County, the population was 1,890.  The population estimated for Lee County as recently as July 2017 is estimated to be 29,470.  Lee County is bordered on the east by Terrell County, the north by Sumter County, the west by the Flint River, and the south by Dougherty County.

The Americus Weekly Clipping of the Lynchings on William Holt, George Bivins, and George Fort

The Lynchings of George Fort, William Holt, and George Bivins: According to the Mary Turner Project Database, three African American men were murdered and lynched on February 11, 1899 for allegedly raping a white woman. Approximately six days later, the Augusta Chronicles reported on the lynching with the title "Three Are Roped Up to Avenge a Crime." The title of the article assumes that the mob of white males gave retribution to an alleged crime that had not even been taken to trial. According to the newspaper article, George Bivins confessed to the crime (with no details as to who the confession was given to or when) and his alleged confession is used as a supporting detail to the mob's journey for retribution. In the alleged confession Bivins gave, he incriminated himself in the alleged rape, William Holt as accomplices in the alleged robbery that took place after the rape occurred. The article also details the sheriff doing everything in his power to protect the prisoners while they were held in prison. However, according to the article, these three men were found hanging three hundred yards from the courthouse. Their bodies were also found covered in bulletholes.

The Americus Weekly Clipping of Lynching on Alf Thurnan

The Lynching of Alf Thurman: According to the CSDE lynching database, an African American male named Alf Thurman was murdered and lynched on April 27, 1899 for informing on alleged crimes committed by George Fort, George Bivins, and William Holt. The title of the article,"Thurman Killed by Negroes Because He Condemned Assault on White Woman" is particularly telling of the bias portrayed in the world of media and news. The article's title acknowledges that this black man was indeed killed by other black men, in contrast to the February 1899 Americus weekly article referring to the three black men who were lynched by whte men, the white men lynching the three black men the white men were "avenging a crime." Approximately eight days after the murder of Alf Thurman the Americus Weekly Times not only reported that Thurman was killed by people of his own race but allegedly he was killed because he carried information that six black men were planning on killing "three prominent white men" (who were unnamed in the article). The article also implicated that Thurman was a part of the mob responsible for lynching Holt, Fort, and Bivins. The article is truly written in an extremely biased manner, as it details Thurman as "respectable" and "had the confidence of the white people" in Lee county. This lynching was extremely hard to do because there was not enough information on his death other than this news article and databases to confirm his date of death, and cause of death. The statements presented in the article do not seem to be backed with credible evidence as many key components of the muder are missing. 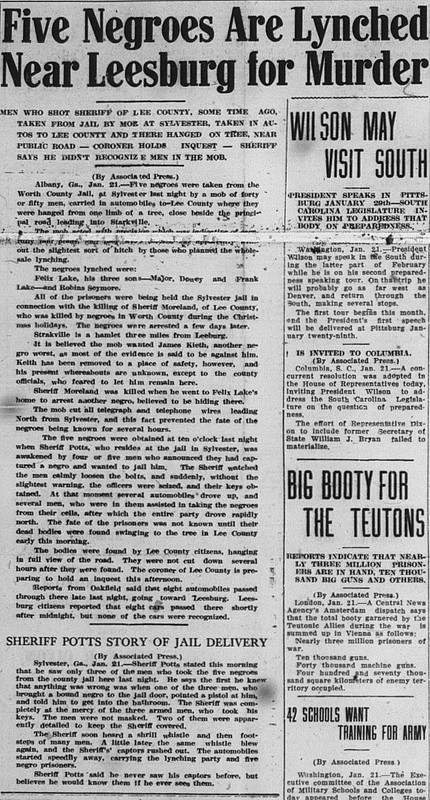 The Augusta Chronicles Clipping of the Lynching

The Lynching of the Lake Family and John Seymour: According to the Mary Turner Project Database, The Lake Family (Felix Lake, Dewey Lake, Frank Lake and Major Lake) were violently lynched on January 20, 1916 for allegedly being an accomplice  to the murder of the Lee County Sheriff. The article again shares the story of a violent mob overtaking the sheriff and taking these African Americans to kill them. In the Augusta Chronicles there is five members of the Lake Family that were taken, but according to the Mary Turner database, and the Daily Times Enterprise, there were four members of the family. The stories leading up to the lynching are also conflicting. The Augusta Chronicles states that the sheriff was tied up by the mob, but the Daily Enterprise claimed that he had to hold the men hostage, and not by free-will. The family was found hanging along with Seymour in Leesburg.