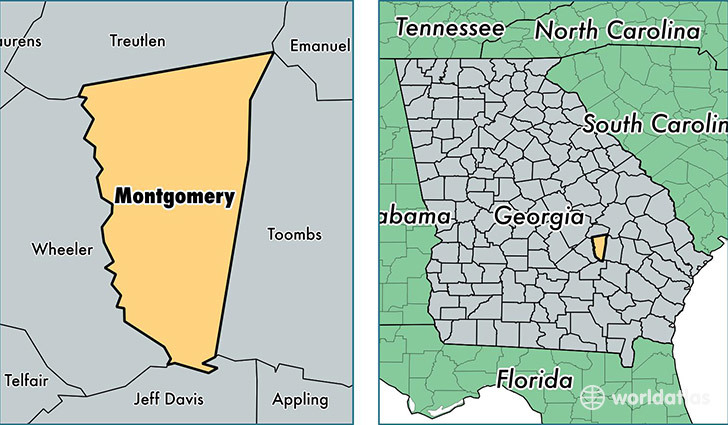 Montgomery County lies in Southeastern part of Centra Georgia near Savannah. In honor of Richard Montgomery, an American general in the Revolutionary War, this county was founded in December of 1793. Consisting of around 10,000 constituents, Montgomery is a relatively small county. The major city in Montgomery is Mount Vernon and throughout history, it has been the central hub of most of the racial injustices that happened throughout Montgomery. On record, there have been a total of 10 known lynchings in this area. These "known" lynchings ranged from 1895-1937. The reason I say "known" is because the first one that was actually reported occurred in November of 1895, but there were a couple of lynchings that were not reported before in May and June of 1895. This shows an inaccuracy of reporting in this area, meaning that there could potentially be many others who were lynched before this date that remained unidentified.

This exhibit is meant to provide an inside look on the known lynchings in this area, with respect to how the South viewed lynching as a whole. A lot of the newsreports uncovered were lousy at condemning lynching as a whole, and even included names and faces of people apart of the lynching mob. The people who were apart of the mob were often never forced to take responsibility for their actions or face any jail times. Even if they were, they were given the equivalent to a slap on the wrist for their atrocious actions. Another thing to note is that these newspapers, although maybe not trying to, were biased in the description of the actions that motivated the lynchings. These articles would be worded so that the lynching victim would seem like they deserved it, which in the majority of cases, was not true. These victims were usually never given a chance to defend themselves in a court of law as the mob took swift and vengeful action against them.

To date, Montgomery doesn't have its own memorial for the lynchings that occurred it its area. Lynching victims and stories were covered up by the media in Montgomery as a way to rid itself of its dark past. However, memorials such as The National Memorial for Peace and Justice in Montgomery, Alabama, seek to bring to light these terrible injustices in order to make the first steps towards making amends to these victims. This memorial includes 805 hanging coffins, each of which represents a county. In that memorial, the stories of these lynching victims finally come to light.

A lot of lynching victims were publically displayed for the whole town to see both as a way to further disrespect the body and as a deterrent for African Americans living in or thinking about moving into these towns. The way these public lynchings were carried were by either burning the bodies openly, as in the case of Benjamin Clarke and John Swinney (1909), or by hanging the dead corpses in the open as in the case of Frank Earle (1901) and George Harris (1895). A common theme in these pictures is that most whites had their faces uncovered because they knew they would never get prosecuted for their abhorrent actions.

William Connell was lynched for the murder of Sheriff G.W. Dunham. Dunham had a bench warrant for Connell's arrest, and on a Monday afternoon he went to go serve it to him. Sometime during the interaction, an altercation happened between the two and Connell ended up shooting Dunham in the head with a double barrelled shotgun. Connell then took off in the night with the gun running for his life. A mob of saddened and angry people from the town formed and hunted down Connell, eventually catching and shooting him until he died. They left his body on the side of the road riddled with bullets.

George Harris was a man accused of frightening a white woman. Although not a crime, a white mob of about 3-4 men hunted him down and shot and killed him. His body was then hung from a tree for all to see.

L.W. Perdue was a Yale educated man of a “good family” who moved to Montgomery County to set up a school. According to many whites, he was a well respected black man in his community. A couple years after his school began flourishing, he hired the daughter of a very prominent mill owner to be his Teaching Assistant. Several months later, the TA got pregnant and accused Perdue of rape. Things got so hot for Perdue in the town, he was forced to flee to Florida. He came back a couple months later with several witnesses to prove both his innocence and the woman's bad character. He was placed in jail, but because of little evidence, he was never indicted. Unhappy with the lack of conviction, 23 men broke into the jail and kidnapped him from his cell. They then stabbed him a copious amount of times, slit his throat, and shot his body until it was unrecognizable and then left on the side of the road. No effort was made by the town to prosecute any of the mob members involved with the lynching. However, the prominent mill owner, whose daughter caused all this, was shot in the head by an unknown assassin as if to avenge Perdue's death.

Americus Times-Recorder (August 08, 1897); Recovered Article on situation that led to the death of Matt Mason.

Matt Mason, who can also be found as Nathaniel Mason, was 20 years old when he was accused of raping a physician's wife. The doctor claimed Matt was on top of his woman when he entered the bedroom and immediately overpowered and apprehended the young man. On his way to the jail, someone fired a gun at him and Mason dropped dead. His body was left on the side of the road.

Frank Earle, or Franke Erle, was a black railroad cook who was continuously cheated out of his wages. One day he held up the station with a revolver to get these overdue wages, after which he fled. He was later hunted down and shot and killed by an angry white mob, and had his body hung from a tree.

Benjamin Clark, or Ben, was an escaped convict who had killed a black man on behalf of his mistress Mariah Swinney. Early that Friday morning, Sheriff J. Hester, along with a mob of white men, arrived at Mariah Swinney's residence to arrest Clark. After stalling for some time, Clark came out of the house firing his weapon, injuring Sheriff Hester in the arm and killing a blacksmith by the name of Jim Darden. While getting shot at, Clark made a run for it before eventually succombing to all of his bullet wounds. His body was taken to an open square in Soperton, and publically burned for the whole town to see. Upon searching the house, the mob found Clark's "alleged" accomplice John Swinney, the brother of Mariah Swinney, and apprehended him to take to jail. However, he was then shot en route to the jail and his body was given the same treatment as Clark. As was the case with many other lynching victims, Swinney was not given the opportunity to defend himself. 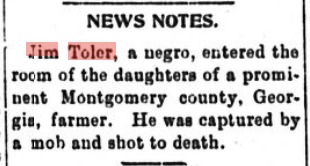 Jim Toler, also found by the name James Tabor, was a black man who was lynched by a mob. His crime was that he entered the bedroom of a prominent Montgomery county farmer. Soon after, he was captured by a mob and shot to death, with his body being left on the side of the road.

S.S. Mincey, age 70, was a prominent African American political leader in the state for over a quarter of a century. He was the district chairman of the County Republican Committe. Re-election for this position came up, and Mincey received many threats telling him to step down and leave within 30 days. Mincey, receiving these threats regularly, ignored them and ended up winning the re-election bid. Later that night, a mob of about 10 masked white men ambushed him in his home, where he and his wife and kids were assaulted with fists and the butts of guns. He was then dragged from his house and was taken to Toombs County, where he was further assaulted. He was flogged so bad, the skin on his back was gone and the shirt he was wearing was turned into some threads. Surviving this brutal attack, Mincey crawled for help in Toombs and was able to be taken back to his residence in Montgomery. However, the wounds were too detrimental, and he eventually slipped into unconciousness never to wake again.

Buddie Sharpe was a black man accused of breaking and entering a white man's home and assaulting him. Following the altercation, Sharpe took off with a mob of angry white men searching for him. Sheriff T.G. Patterson and Mayor John W. Underwood led this manhunt until it reached the steps of William Kirby. Kirby was sitting on his porch when these white men demanded to see the inside of his house to which Kirby refused. He claimed to have no knowledge of Buddie Sharpe, or of his intentions. Becoming impatient, a member of the angry mob shot Kirby a number of times which killed him. After his death, they ransacked his house only to find out he was telling the truth. In fact, Mayor Underwood was accidently shot because he came out of the house too quick and the mob was anxious. Kirby was 75 years old when he was killed, and had no history of any violence or wrongdoings in the town.

Tolnay, Stewart Emory., and E. M. Beck. A Festival of Violence: An Analysis of